Everybody’s heard of superstitions; many of us hold them. Superstitions are beliefs or behaviours that are based on fate, magic, luck, the supernatural, or fear of the unknown and are considered irrational or supernatural by those who do not believe in them. It is believed that superstitious beliefs have been held since the earliest days of humanity. By believing that our actions could influence highly unpredictable events, such as illness and natural disasters, we might have found comfort in the feeling of having control.

Superstitions and the link to OCD

Obsessive compulsive disorder (OCD) consists of obsessions and compulsions. Obsessions are recurrent, distressing intrusive thoughts, urges, or images. Compulsions are repeated thoughts or behaviours to prevent the thought from coming true or neutralising the thought. For example, someone may experience obsessions about contaminating their mother with a deadly disease and so repeatedly washes their hands to prevent spreading contamination.

Magical thinking is a key part of OCD, and involves believing that by performing a certain action they will prevent something awful from happening. For example, someone may think, “If I do not open and close this door three times, my family will get into a car accident”. This same type of thinking is also seen in superstitious beliefs, such as, “If I smash a mirror, I will receive 7 years of bad luck”.

Superstitious behaviour and compulsions are driven by a belief that we can influence the outcomes of, often unrelated, events. The key to anti-OCD and anti-superstitious tasks is not to prove that bad events do not happen (because sometimes they do by coincidence), but to tolerate the uncertainty of not knowing whether bad things will happen, and to gather evidence to challenge our role in such events.

On Friday 13th May 2022, the OCD and related disorders unit held an anti-superstitious event.

The specialist OCD clinical team collaborated with inpatients on the OCD ward, to carry out a variety of acts to challenge superstitious beliefs.

Some of these tasks included: 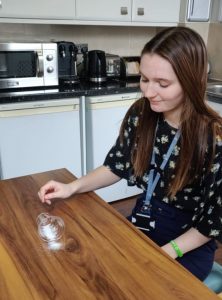 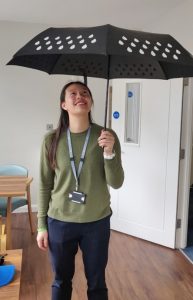 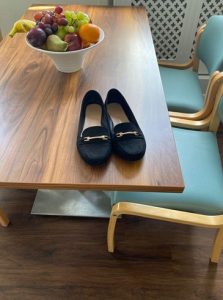 Origins of some common superstitions

The origins of some common superstitions are listed below.

Although the true origins of the superstition that Friday the 13th is bad luck are unknown, there are long-standing beliefs that both the number 13 and Friday bring bad luck. Hence, the combination of them both is double the ‘badness’. The fear of Friday 13th and the superstition that it brings particularly bad luck may only be around 100 years old.

The ‘unlucky’ number 13 has its origins in both the bible and Norse mythology. In the Bible, there were 13 people at the last supper, with Judas who betrayed Jesus being the 13th member. In Norse mythology, a dinner party of 12 guests was ruined by Loki, a trickster god who caused the world to be plunged into darkness. There are other references to 13 being an unlucky number elsewhere too. For example, the 13th tarot card is the death card, and the 13th letter of the Hebrew alphabet is M, the first letter of the word ‘mavet’ meaning death.

Friday has been considered the unluckiest day of the week for hundreds of years. Geoffrey Chaucher’s Canterbury Tales states, “And on a Friday fell all this mischance”. Friday used to be known as Hangman’s Day in Britain as this was the day all those sentenced to death would be hanged. Good Friday is named as such because it is considered to be the only Friday that goes against the belief that Fridays are unlucky.

It is widely believed that opening an umbrella indoors brings bad luck upon the person. When an open umbrella is held over someone’s head indoors, it is a sign of death.

The exact origins of this superstition are unknown, however, it may have stemmed from the Ancient Egyptians. The Ancient Egyptians believed that opening an umbrella indoors, away from the sunlight, would anger Ra (the sun god), bringing negative consequences.

Nowadays, this superstition is likely more about preventing injury. When modern umbrellas became popular in the Victorian era, they contained a spring mechanism which expanded the umbrella quickly and dangerously, with the ability to seriously injure an adult or child or shatter objects. The superstition was likely used to deter people from opening umbrellas inside and injuring someone.

Placing shoes on the table

Placing shoes on a table is thought to mean bad luck for the rest of the day and yet again, signifies death. This may have originated from the coal mining industry. If a miner died, their shoes were placed on the table as a sign of respect. So, doing this when the miner was not dead was seen as tempting fate. Another explanation for this superstition is that the table is the representation of the church’s altar within the home. Hence, placing shoes on the table was disrespectful to God.

A more practical explanation is that shoes carry germs, and it may be unhygienic to place them on the table where we eat!

Spilling salt is considered to be bad luck. This likely originated from when Judas spilt salt during the Last Supper.

If both salt and pepper are spilt at the same time, the force of this ill omen is doubled.

Walking under a ladder

One of the explanations for why walking under a ladder is unlucky, stems from Christianity. The Holy Trinity (The Father, the Son, and the Holy Spirit) made both the number three and the triangle sacred. A ladder leaning against the wall forms a triangle therefore walking under it would break the Holy Trinity. This violation of the Holy Trinity is seen as blasphemous and could potentially attract the Devil.

More practically, walking under a ladder can be dangerous. Chances are someone is working at the top of the ladder and so most people do not want to risk something falling on their head!

Some people have an irrational fear of Friday 13th, this is known as ‘friggatriskaidekaphobia’. However, others (like us here on the OCD ward) celebrate Friday 13th by carrying out anti-superstitious tasks.

A group of people in Fullerton, California have an Anti-Superstition Bash where they tempt fate with a variety of activities and games. This event is in honour of the friggatriskaidekaphobia treatment centre in Fullerton where they claim to cure people of their fear. Clients at this treatment centre go through an anti-superstitious obstacle course which includes walking under a ladder, stepping on a crack, dancing inside with an open umbrella, and breaking mirrors.

In India, there is an organisation called the Maharashtra Andhashraddha Nirmulan Samiti (MANS) which is dedicated to fighting superstition. It was founded by Narendra Dabholkar in 1989. MANS have protested the torture of those with mental illness based on the superstitious belief that it will cure them and debunked individuals who call themselves ‘godmen’ claiming that they can perform miracles.

MANS have been campaigning for a law to be passed which checks the exploitation of superstitious beliefs in Maharashtra. This law, which came into effect in August 2013, criminalises practices related to black magic, human sacrifice, magic remedies, and other practices which may exploit people’s superstitions. For example, the law criminalises carrying out or encouraging others to carry out acts which endanger life/cause serious injury in the hope of gaining supernatural powers.

Read more about about OCD, including resources to support sufferers and their loved ones.